Pastor Sammie D. Simmons is a living example that “Many are called but few are Chosen.” This is exemplified through his tireless efforts of commitment to two of the most active and progressive congregations throughout the Sumter and Lynchburg Counties. He serves as senior pastor of the St. Mark Four Bridges Missionary Baptist Church as well as the Bethesda Missionary Baptist Church of Lynchburg, S.C. He currently presides as the Moderator of the Wateree Baptist Lower Division of Sumter, South Carolina, an Association of over 25 churches.

This vibrant man of God is no stranger to his community. He is the President of the Four Bridges Community Development Corporation. FBCDC is a community Development organization that provides tutorial and educational service to community youth, ministry and service to the elderly, as well as, career and skills training to the disenfranchised. He currently works with the Sumter County Boys and Girls Club at the Sumter County Parks and Recreational Department. He also serves as Chaplin to one of South Carolina’s finest educational institutions, Sumter High School. The National Council of Negro Women invited Pastor Simmons to conduct the opening and closing prayer at the groundbreaking ceremonies for the Mary McLeod Bethune Park in Maysville, South Carolina. In 2009, Pastor Simmons was invited as a consultant to the Mayor’s office to establish the Sumter County prayer initiative. This initiative was designed to unify the Sumter community in prayer and action to improve community living standards for all Sumter residents.

Pastor Sammie D. Simmons is a chosen vessel of God, advancing the Kingdom of God in the South Carolina region and throughout the world. Serving as the pastor of St. Mark 4(B) Missionary Baptist Church and the Bethesda Missionary Baptist Church since 1994, he has devoted his time to bringing the Kingdom full circle in the house of worship. His proven efforts include continually growing memberships that are inspired by passionate and sincere corporate worship and the presentation of relevant, powerful instruction. Growing memberships prompted several construction and renovation initiatives. Pastor Simmons oversaw the construction of a $500,000 state-of the art- edifice in 2000 for St. Mark. The project was completely paid for in less than 7 years. Pastor Simmons oversaw the massive renovation of the Bethesda edifice in 2002. Constant growth led Pastor Simmons to facilitate the purchase of a 936,000 sq ft. facility worth over 1.7 million dollars in 2006. This facility presently houses all community outreach initiatives for the FBCDC. His outreach efforts have taken him from the small town of Sumter all the way across the Atlantic.. Pastor Simmons was invited to serve as a pastoral missionary to the Republic of Benin Africa. He has embarked on two missionary tours to this country and has adopted the villages of Cotonou and Lakossa . His initiatives there have led to the construction of a Clearwater well that provides fresh drinking water for the villagers, a medical facility and a school to serve the medical and educational needs of the communities. Pastor Simmons also hosted an African delegation of ministerial leaders from Kenya to Sumter. He facilitated their arrival to the US and provided them access to observe and participate in American churches.

Pastor Simmons, a humble servant of God. He shares his accomplishments and success with a beautiful family, his wife, Shirby J. China Simmons and his four children and three grandchildren. He accepts his calling as no mistake and thanks his parents, the late Loris Simmons and the Late William P. Simmons, for their great vision, which helped to prepare him for the calling that God had ordained for his life. His motto: God First, Family Second, and Business Third, keep your life in that order and God will Bless you like you would not believe! 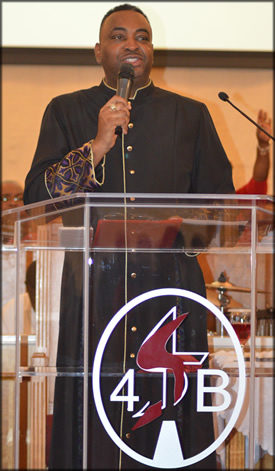